The Most Influential Star Trek Fanfics You Can Read Today 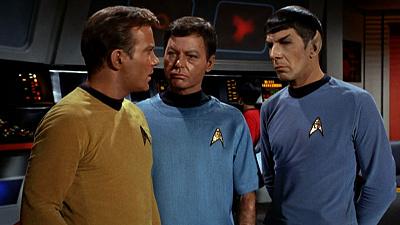 Now, fanfiction lovers have the luxury of the internet. We even have huge sites dedicated to it, like fanfiction.net or the more recent Archive of Our Own (otherwise known as AO3). Fanfic is known as a pastime for fans of books and TV shows who want more content featuring their favorite characters and story worlds, but it’s also a lively community where amateur writers can publish and receive feedback. Readers are often hesitant to devote time and energy to a new, un-vetted book series, much to the chagrin of many writers, but when they already have some “skin in the game” as fans of a particular piece of media, they are avid consumers of similar content. They can’t get enough. This almost guarantees fanfic writers a larger audience than they might have for their own original works and gives them valuable information about what works and what doesn’t.

Fanfiction existed in various forms before Star Trek, but no one had yet done it quite the same way. It was the beginning of fan “zines,” or independently-published chapbook-like pamphlets. Interestingly, a lot of the content was essay-style speculation on the universe of Star Trek, rather than character-focused fiction.

In a trend that continues to this day, most of the writers and publishers were women. Because of systemic misogyny, our culture often doesn’t take seriously the things that girls and women do, and that goes for fanfic too. However, in reality, fanfic pioneers have created a rich culture of creativity that’s still going strong after 50 years.

Here’s a list of historically influential Star Trek fanfiction works that you can read today, complete with links to the texts.

The name is a play off the Grecian festival “Bacchanalia,” a hedonistic event to celebrate the god Bacchus.

Spockanalia was the first fanzine published that contained only Star Trek content. It was intended to be a one-shot (a single publication) but ended up as a five-issue series.

The fans who published Spockanalia (Devra Michele Langsam and Sherna Comerford) had close relationships with the show creators. Roddenberry loved the zine and made it required reading for everyone who worked on the show. Many of the actors appear throughout the five issues, often writing from the perspective of their characters.

The five issues contain, among other works:

All five are available here.

You know what “slash” fiction is, right? If you need a primer, slash fiction is about the romantic and/or sexual relationship between two characters, usually both male. It’s described or tagged with a slash between the character names, like: “Kirk/Spock” or “Harry/Draco.”

Here’s the link to the full text of “A Fragment Out of Time.”

Della Van Hise, a “prolific” writer of Kirk/Spock slash, sold her work to Star Trek novel publisher Pocket Books in 1985. It was published, accidentally, in two editions, with the first edition being much more “slashy” than the edited second version. In reality, it simply portrayed the two as very close, but that was enough for many readers.

Here’s the link to the first edition of Killing Time.

Here’s more Kirk/Spock fic, this time by Leslie Fish and Joanne Agostino. It’s the third published piece of Kirk/Spock fic and, like much fanfic even today, focuses mainly on the emotions of the participant characters. While it is sexual, it’s not very explicit.

Here’s the link to “Shelter” and the sequel “Poses.”

I am planning a sequel to this post, featuring influential fanfic that has been written in the internet age. If you have any ideas, comment below!

A 50-year Trekkie bestows Star Trek history upon the next generation: How fandom and fanfiction sparked the galaxy’s most controversial romance

Fanspeak: The Brief Origins Of Fanfiction